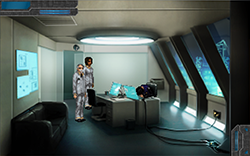 Dr Vargas comes in and explains a lot about himself, Central, Regis and Baxter, while his daughter Galatea is acting as unfriendly as she is.
And finally playing as Dr Lao we can power up her computer and read the T-Mail from Galatea. Download the attachment, don't wonder about the buggy noise it makes and then leave the office and enter Vickerman Pharmaceutical.
Ask Dr Chigwa all you want to know (for impatient players: 2,2,3,3) about Baxter and his death to do your duty as CEL officer. After some more questioning you talk about Regis and find out he left a message for you in some of the samples he gengineered. Asking Dr Chigwa if she knows of more scrambled samples might be a good idea. 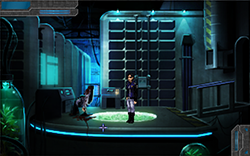 After you got the DNA Sampler from her let her be and search for the plant that fits her description (not the name). This is likely randomized, so pay closer attention to what she says and search for this plant. Most of the time, it is one of the plants in this very first room with Dr Chigwa in it. I once had the blue plants next to the DNA Sequencer between the two doors or the yellow plants in the foreground here fit the description. They have a hidden sample in their genome of course. So let's sample that one with the DNA Sampler and bring it to the DNA Sequencer.
Now enter the door to the left. The pink haired guy called Niester doesn't make any sense at all but is a nice random word generator. Let him be and continue to the seedbank to the left.
What you see is not nice but inevitable. Dr Baxter has been decapitated. Look at the corpse to contact Central with the update.
Leave Baxter and try to enter the Airlock to the back of the room with Niester and the production Line. Seems like your security clearance is not sufficient enough to enter. Well, just use your wetware to hack into it and create a new user profile for you. That will do the trick. Enter the airlock now. 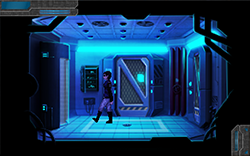 Check out the first aid kit on the wall and pick up the Hydroxypyruvate Isomerase. This helps Niester get back on track as he infected himself with a disease and this stuff cures it. So get back to Niester and shoot him the good stuff. He slowly comes back to his self and is able to make sense and talk to you.
You can interview him about a lot of things, especially his disease habit, but the most important topic is the sample he found, it is Acoraceae Brasiliera. With that in mind, go back to Baxter's corpse and the seedbank. Of course you search for Acoraceae Brasiliera in the seedbank database, it is the 4th item. Let the rail drone fetch a sample of it and sample it with your DNA Sampler directly from the rail drone. This is the next needed DNA Sample.
And while you are here, order the rail drone to bring you a sample of Xenosporans Tizardi. This will be useful later on, so just pick it up, don't sample it, as this is impossible as this specimen needs to grow a bit. Lao just picks up the alien specimen. Hopefully this won't turn out to be a bad decision. 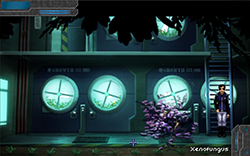 Now enter the airlock once again and continue onwards through the left door. We can't take out the sample we need yet, so just play around with the pipes here and cause them to break. Get back to Niester and tell him about the burst pipes. He picks up his toolbox and goes to fix the broken pipes. Follow him and this time in the lab climb down the ladder and take a look at the purple plants in the last growth chamber on the left. Of course what we are searching for is in the last chamber! Take a sample from it now. Before climbing up again, put the alien specimen growth matrix into the empty growth chamber down here.
And now, let's waste some time to make the alien growth grow. Actually just climbing up the ladder and climbing down again is enough. Of course you take a sample from that rapidly growing alien fungus now. Then climb up the ladder again and hide the complete DNA Sampler inside Niesters toolbox. Dr Max Lao is not allowed to take the sample of the purple plant called Orchidaceae Isotria out with her, as this breaches commercial copyright, but Niester is allowed to smuggle out the Orchidaceae Isotria sample. So leave him and find Niester back at the production line. And now you can get the DNA Sampler back from Niester's toolkit and sequence the DNA samples you just stole. Bad CEL Agent! Well, technically Niester stole it. So that's it for the samples at Vickerman Pharmaceutical.
Go to the DNA Sequencer and sequence all the samples you have loaded into your DNA Sampler. Finally we can hear what Regis recorded not long ago.