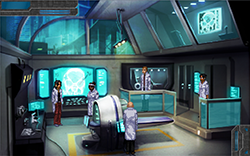 Finally we get to know Viksha and what she did and didn't do. So just walk around and talk to all the other scientists in the room about everything there is to get some more story detail, get to know the people you are working with and to proceed the game. Dr Baxter is especially stressed out as something went wrong with his former project, so he needs this project to succeed. Finally Dr Vargas appears and explains why he gathered all these brilliant minds here. He wants to create the future in the past of the future. And this future is already present in the future and it is called Central. 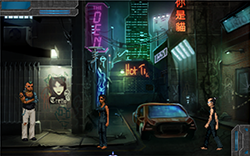 And then we find ourself as Latha in the streets of Newton again. She is where Jinsil wanted her to go, and the only place of interest around here is the Trance Den on the corner. But the bouncer won't let us in that easy. Just tell him you want in and ask what you have to do to get in. Offer your skills to get in. He tells you the water supply for the den was cut. Offer your service there and then go and find the sewers to turn on his water again.
So check out the only car around. If you get too close an alert goes off, so just use your wetware to hack it. Put in a gear, set a speed and then unlock the breaks. Here we go. Go get something from that wreck now, like a shiny new crowbar. 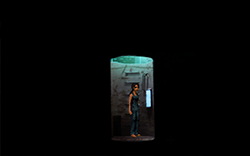 Open the now visible manhole in the street and climb down. Use your new crowbar to open the grate and the panel over the terminal. Connect your wetware to the Terminal and turn on the water for number 871. Also check out the Hazards List on this interface. You download 3 chemicals that are in the water in Newton. Nice. This sure will come in handy soon.
Now you can climb through the shaft or take the official route past the bouncer into the den, he will let you in once you turned on the water again. In here, check out the tranced out girl in the background. Check the sofa she is comfortable on and you will find her credit chip. After stealing, let's go and destroy stuff. Smash the crowbar against the pipes on the left. What a messy stuff that creates. Now use your crowbar to uncover the public terminal from all the wetware and get a grip on it. Connect your wetware to it and enter the Trance now. 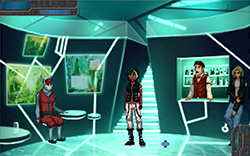 Enter the bar in the back of the room to meet Jinsil again. But she likes security very much and wants you to make everyone else leave this server. So let's start with CaptainCheese969 right here in the bar. Just talk with her about her money and tell her some big guy stole it from her. And off she goes.
Now talk to Gandarf, the floating head in the lobby. Mandala just tells him he is getting wet with dirty water and he immediately leaves. Now enter the game room and enter GravBall! 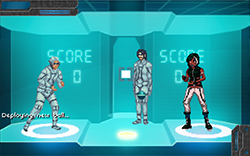 Watch as Domino, the best player on this server wins again. You could talk to the loser to get some hints, but it is not necessary, what good hints would you get from the loser of the game? Then talk to Domino to start playing. You have no chance, as Domino is indeed the best player around and he also is the other guy in the Den next to you, hooked up on the Epinephrine via IV that make him just the better player. After you played leave the trance and get outside the Den, a manic street preacher is out there selling salvation. Just entering the GravBall game room triggers his appearance, you don't even have to play a game, but it is more fun this way... 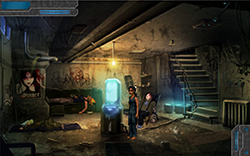 Talk to The priest through almost all topics and realise he is a drug dealer for narcotics (six times dialog option 1). So stop talking to him and pay him for a bottle of Narquine with your stolen Credit Chip. Now get back into the Den, load up your injector with the Narquine and shoot it into Domino, while you can access him in meat space. Then enter Trance and go playing GravBall once again and beat the dizzy Domino at GravBall.
Now give the bartender the substances from the sewer and order a shot of Sulfuric Acid from that nice list. With that in your pocket enter Get Nuked in the game room! What a blast!
In the Get Nuked game pour the Sulfuric Acid over the metal plate on the rock to uncover the game controls. Turn off god mode and nuke it again. You get disconnected but so do the 2 users in Get Nuked! 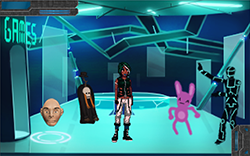 As you are disconnected already now, get outside the den. Destroy the antenna for the overseas connections with your crowbar. Of course the bouncer won't let you get in anymore now, but you can climb in through the sewer anyways or you just turn off the power for the Trance Den from the sewers, so he won't see you sneaking past him. Alternatively you can also block the connection of visitors from specific parts of the world directly on the trance terminal. In this case block the connection of everyone from Russia.
When you are close to the terminal again, reconnect to the Trance. The dancing users are now disconnected from the server. Hah, tourists.
And we are alone with Jinsil on the server. Bartender, make us your best drinks. Sadly he lost all his best recipes and Mandala won't hand out her drinks to Jinsil anyways. So Jinsil talks you into illegally getting close or even into Central, the all-knowing AI, and relaying the hacker signal for Jahiliyyah through your own brain. What could possibly go wrong?!

After that we leave Latha and Mandala for a while and travel back in time to play as Dr Viksha Regis again. You should talk to Dr. Varagas, who is just getting his brain checked inside the huge scanner in the middle of the room. And after Viksha says, what she offers as an option to proceed the project she should get her head check too.