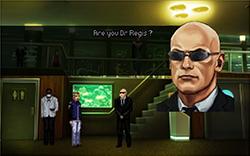 And finally we arrive on a funeral party for Central. All the conspirators to shut down Central are gathered in this niche restaurant. Ask around a bit until the waiter appears. The waiter looks strange, so you better talk to him (once you are done getting to know all the conspirators). Of course he explodes and we have a murder case at hand as the beautiful celebrity Imogen Natalia Revilla-Quintanilla de Florez is dead now. Oh my! Who could have done this? Well, Regis is still a cop, so he better finds out. 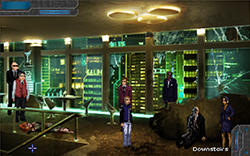 So get down the stairs and enter the restroom on the left side. In front of the malfunctioning mirror is a cabinet that can be opened to get a toilet cleaner, but this is a completely useless item, Regis is no plumber. Rather enter one of the stalls to get a tissue paper. Now open the vent on the right and climb in there.
Seems like whoever staged the explosion came in here through the brumxduor. Below the open vent to the left is the cover for the vent. Swipe over it with the tissue paper to get some of the suspect's DNA. Now leave the vent and the toilet and enter the kitchen on the other side of the security synth. 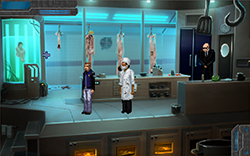 Try to talk to the guard in the kitchen. This doesn't work at the moment, but this makes Regis remember this deactivated guard. Now talk to the cook about his speciality, the human bodies (and more if you want to and you are still interested in this). Afterwards look at the bodies floating past in the background. Regis still has it, he found the dead body of the actual waiter. This means, whoever killed the waiter has been in the kitchen to do this as killing someone inside the restaurant would be very suspicious.
Now look at the growth chamber on the left end of the kitchen. Just purge the current project, leave the growth chamber screen and use the tissue with the suspect DNA on it to investigate the DNA. The XY chromosome in the suspect's DNA means the killer has to be male, so that takes Nina Jeoung off the list of suspects. 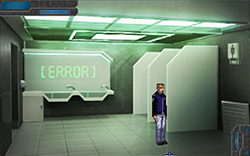 Get back up to the other suspects and interview Mr. Stepford. Of course he does not only produce Synths, he is a Synth and acts like one. But you only want to talk with him about the broken guard in the kitchen. It should be the first dialog option once you examined the broken guard in the kitchen. He wants to see the broken platform, so lead him into the kitchen. There Stepford stops working too. Just use the CI Splitter to download his brain parts. Get outside the kitchen again and use the CI Splitter to upload Stepford's brain into the guard in front of the kitchen. If you only upload Stepford's personality you score the Steam Achievement Dave Goldfarb. Then just use all his purple brain parts. In his new body Stepford explains that no Synth can enter that kitchen, so Stepford can't be the murderer, and we have one suspect less. 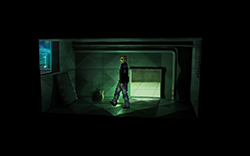 Now we want to get rid of the last innocent suspect on our list, so get back into the kitchen and take a look at the counter. Regis finds a bone saw and an empty jar inside it. Use the bone saw to cut off a slice of meat from the corpses in the background. Stuff it into the jar and use this as a bait to catch one of the aggressive glowing fish in the broken aquarium. And now we have a light. Enter the ventilation shaft in the toilet again and light up your glowing fish to finally see something in the ventilation shaft. The rucksack you now see has a message to the bomber attached. Read it! So who is this GWBU? Maybe we should ask Ran Shou-Man about it. It seems he can't even read or write English, so this narrows the circle of suspects down even more. And it is just now that Councilman Deane wants to talk to you in private. And he has some interesting things to say. After he confessed to you, you have to reveal this to the others. Will you do what he said and frame Ran Shou-Man or will you tell the truth and tell everyone that Councilman Deane did it? Both decisions will end very seriously for the accused person. 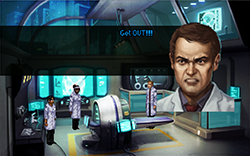 Afterwards we are back 20 years earlier.
Viksha and Charlie are having an argument and Charlie is very pissed. And you even have to pick some answers for them. Now that's mean, but try to talk your way out of this. Well, we all do weird stuff, when we are in the future...