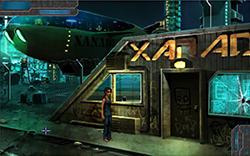 And we are back playing as Latha. As Latha is now getting better and better at destroying things you should continue on that habit and smash the air conditioning out here with the crowbar. Somehow this makes the mug in the window available as a hotspot. And since we still have some tranquilliser left in our injector we just pour it into the guard's mug and watch him fall asleep pretty fast.
Now there is nothing we can do outside besides being impressed by the aerostat and the future tech we should just get inside. 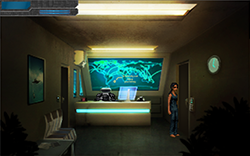 Poor Crisis Agent sleeping on his desk, so we should check if he is alright. Plug your wetware into him and access his wiring. Connect to your trance hub and speak to the Crisis Agent, called COBALT in here. Take him to one of the locations and he will tell you everything in his dreamlike state. Especially the door code, which is 4 4 1 3 8.
Enter the code and enter the door. There is a crate you have to smuggle yourself into the aerostat with, but at the moment the weight is too heavy when you are also in it as additional weight. So check out the scale on the right. It shows 51kg and when Latha steps on the scale it goes up to 96kg, that means Latha weights 45kg. Also note, that the crate has A-121 written on it.
So we get back to the terminal next to the Crisis Agent we just knocked out and use his terminal. There we search for the freight with the number A-121 in the list on the left side. It is supposed to weight 30kg, but Latha brings another 45kg to the table so we add this to the 30kg and set the weight for crate A-121 to 75kg. We also need to set the contents of the box right, so chose Transplant Material (human) and just exit, don't press the revert button! 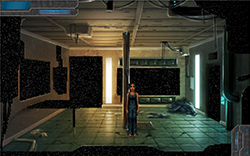 This should work all the time, just in case the values vary slightly on different playthroughs (which I doubt), just do the math!
After hiding in the crate you get transported to... an unexpected but very well-known place. Deconstruct your old apartment piece by piece until there is only static left. Kreisel, the Mindjacker and Galatea fiddle around with you and also in your brain it seems. As if they had been expecting you. This is not good! 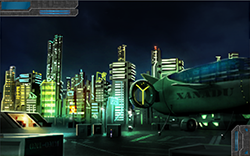 But Latha is trapped now and so we are back with Charlie at the Xanadu aerostat airport, let's see how far he can reach inside the aerostat airport before getting captured. As there is no one in your way and stopping you, just enter the aerostat. In the cargo storage room inside the aerostat you don't have to hide, this Crisis Agent has the wrong job, he is as blind as he is dumb. But this is no action game, so we want to use our brains to get rid of him. So just sneak behind the crates, wait for the agent to walk all the way to the right and then push the console to open up the cargo door and get rid of the Crisis Agent. Yay, disposed another Crisis Agent. Though we are not in the air yet, so he would have just fallen a few meters, but he is gone now. 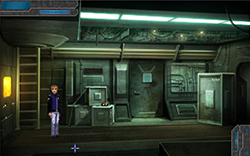 In the next room we grab the goggles of course. Also check out the lockers to the right of the huge ladder, you get a Bolt Gun for this. If you want, you can risk peeking into the sickbay for a moment, but there is nothing you can do there at the moment, not even climb up the ladder. You rather get back to the cargo storage room inside the aerostat. Use your thermal goggles and you will see that there is someone, of course the only guard around, standing behind that wall. Shoot him in the back with your Bolt Gun. This takes care of him. Now enter the sickbay and get tricked and knocked out by Galatea, that sneaky bitch. Also Kreisel enters and feels and acts like he is Baxter. 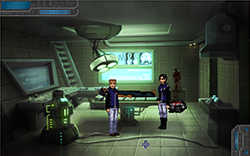 After you are not that talkative Lao enters the aerostat too. After Kreisel is pinned to the ground you continue playing as Dr Lao. Let's rescue Regis and Latha and don't get captured this time, okay?! Enter the sickbay and see Galatea escape. There is not much you can do besides connecting your wetware to the Terminal in the sickbay and asking Dr Baxter funny questions. So finally give Regis a fix from your injector and wake him up again. Then talk to him. A lot. About everything you can. Especially about Chantelle, then Regis hands Lao the Mindsplitter. Ask him if he found something useful. He now hands you a cable, a scalpel and the thermal goggles. And while we are here, use your wetware to connect to the shot guard on the ground. Now you tapped into their internal communication system.
After that you hack into the yellow terminal outside the sickbay by using your wetware on it. Read the mails to get some clues about the wiring of the aerostat. They run through the hallway and come together in some vulnerable junction points. So put on your thermal visor goggles to see all 4 junction points. Open every single one of the Junction Points just by clicking on them to use them to compromise the controls. Then enter the cargo area of the aerostat and pick up some uranium AP Ammunition from the new crate in the middle of the room. And while you are here already open the hatch and take a look outside. Nothing will happen though as long as the engine is running so just dump the AP Ammunition into the engine. Sadly there is no explosion but at least the engine stops and Lao will be more adventurous. You could try climbing along the pipe just for your morbid desire or you don't kill Lao and use the cable on the pipe to secure her. After you swung the cable around the pipe Max climbs along the pipe to a window underneath another Crisis Agent. 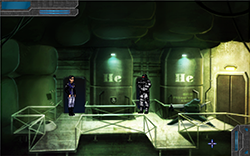 Because you hacked into the other guard in the sickbay before you can just use your Traveller to call this Crisis Agent on his line and order him to the port side of the aerostat. Here we go! We can enter and are stopped again by a giant turret that only wants to shoot you or would only stop on a voice command by the correct voice. And this is not your voice. But the voice is the key. Just use the scalpel to cut into the patch on the helium tank to the left of Dr Lao to fill the whole room with helium. And now sacrifice the guard and order him to go to the port side again via your Traveller. There he goes and you can safely pass through here. But of course the door is locked. So open the hatch on the left, climb down the ladder and get all the brain chips out of Chantelle with the CI Splitter if you haven't done that before. Then climb back up and use the CI Splitter on the turret. Implement Cheffie's personality and the Maid's memory, but leave the Role-Memory of the turret in there. Now feed the turret with the ammunition and ask it nicely to blow open the door. And there we have the 2 culprits at gunpoint.

Regis just wants to tell us why we are headed towards Fulcrum Tower as Latha wakes up and detains him. Try to talk your way out of that, but something happens. So get Max downstairs again to see what is going on. Somehow Latha shot Regis with his own signature weapon. Dr Lao can't believe this and scans both of them only to find out they share their genome to about 50%. This is getting interesting...