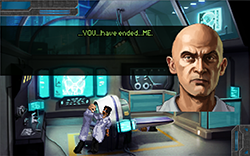 And we are back 20 years in the past again.
Poor Baxter is very disappointed to not be playing around with Viksha's and Charlie's embryos and goes crazy and strangles Viksha to death. Not a nice thing to do. At least we now know what happened back then, but now we should focus on what happens now in that future present with Regis, Lao and Latha. 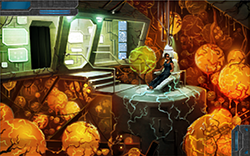 At first switch to Latha and use the controls on the left or the cable reel. This will float up a balloon with an antenna attached so Nina Jeoung and her hacker crew can access central. Then enter the open door in the middle of the screen down here. After gazing at the glowing and pulsating neural processors of Central for some time take a seat in that special chair. These neural processors are probably also Regis's relatives as they are grown from his embryo's tissue too. But Latha will now enter Central. Oh look at that, Jinsil is really there. You can now either be angry at her or be nice to her. Being nice keeps her here, being angry makes her disappear. She wants you to activate a transmitter array in the coms room. Whatever you do, from now on Jinsil is just useless... 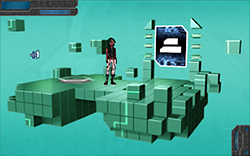 So move up one storey and check out what else is happening inside Central by entering the Data Shunt. Central itself (herself?) is there too, so you can talk to Central here. Ask Central, how it can help you finish off Galatea. Central wants more power routed to its system from the turbine room to crack the final door's security. Of course everyone wants more power, even the all knowing AI.
Continue your quest within Central to the left, into the connection to the Visual Systems. Take a look in the most prominent camera feed to see Kreisel, the Mindjacker, armed and hiding behind a crate. For now, let him be and call one of the Service Drones from out of the shaft on the right. Drive that Service Drone into the background door opening and park it there for now.
Then switch to Dr Lao. Make her use the elevator and drive up one storey. Search the dead Crisis Agent here to find a grenade. Then enter the door to the left. Wohah, Kreisel shoots at you, but he has a bad aim and but therefor unlimited bullets...
Switch to Dr Regis. Before calling the elevator pick up the wrench next to the corpse on the lowest level, then call the elevator and drive up to Lao, pick up a grenade on your way to her if you want. Now deposit the grenade inside the Service Drone and switch to Latha inside Central inside the Camera Feed once again. You now have the choice to either kill Kreisel or just hurt and arrest him but still get access to the power controls he is guarding. I'll describe both ways now. 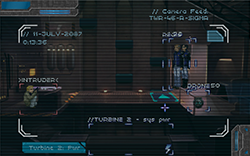 To kill Kreisel just drive the armed Service Drone back into the vent shaft it just came from. It reappears one level lower. Don't drive over the rotating turbine there yet, rather switch off the turbine's power with the Turbine 2: Pwr button. Then drive over the stopped turbine and maneuver the armed Drone under Kreisel and nuke him. He is gone.
If you want to keep him alive as you somehow like him, don't want to kill people or just want to solve an interesting puzzle you have to drive the Drone over the movable small elevator platforms in the middle of the room. Just imagine them number 1-3 from left to right. Get the drone into the elevator 3. Move up elevator 3 and drive to the left, into elevator 2. Then move up elevator 2 and move down elevator 3. Drive back to the right, onto the top of elevator 3. Move up elevator 3 and move down elevator 2. Drive over to the left to the top of elevator 2 again. Move up elevator 2 and drive to the left onto elevator 1. The drone should continue its way and explode some electronic stuff. This turns off the light and gives you enough time to overthrow the Mindjacker. And he is still alive.

And now you have another decision to make, do you want to keep Central and route the power to Central to decrypt the door's security system or do you want Nina Jeoung and her hackers to crack the door's security and before that turning off Central? Turning off Charlie's own electrical daughter and letting the scrupulous Nina in or keeping Central and screwing Nina over? Either way it turns off one of the 3 security locks on the final door but gives you a different ending. You might want to save the game here before making the decision to go for the Civic Continuity Ending (by keeping Central) or for the Brave New World ending (by letting Nina in).
Switch to Latha now and move her up another floor in the Virtual Reality by accessing the Data Shunt on this floor. You end up in front of another door. Use/Click on this door to hold it open. This unlocks another one of the locks on the final door in the upper floor. And exactly there we want Regis now. But before that position Lao in the neural processor room with the chair and the glowing globes. 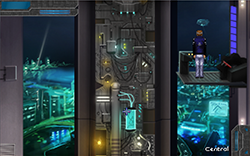 Then call the elevator for Regis and drive towards the upper floor. When you are close to the open blue Power Conduit on the right side of the elevator, jam the wrench into the wheel of the elevator to make it stop. Then touch the Power Conduit with Regis, switch to Lao and make her touch the blue Power Conduit in the neural processor room too to get rid of the final lock on the giant door. Of course you have to touch the Power Conduit almost at the same time within a destinct but quite long timeframe. Then drive Regis up to the upper door and enter the final door, Lao will follow him anyways!
Galatea will surrender while Mandala opens that final door for her. And there you meet the mind of Dr Adam Baxter again and can ask him some questions. After you are done finding out that you are locked and can't even disconnect from that Trance you better switch to Regis once again.
He is in the upper level server room where the Memory Module that once was in Van der Waal's fridge uploads a lot of Data, all these Minds, directly into Latha's brain. But Lao won't let you do anything useful in here, so you better stun her with your Jolt-Gun. After she is out of the way open the hatch in the server room and flip over that switch.
Now watch the ending unfold.