Technobabylon 1
The Prisoner of Faith

The Technobabylon series by Technocrat is something for everybody that even remotely likes Science Fiction. It reminds of the glory days of point and click adventure games and especially of great games like Beneath a Steel Sky. And you can get the first 3 Technobabylon games in the series for free while the complete SciFi Cyberpunk epic walkthrough is linked, but you have to pay for it.


Of course you can find the Walkthroughs for the other parts of Technobabylon here too:


Technobabylon 1
The Prisoner of Faith
Walkthrough 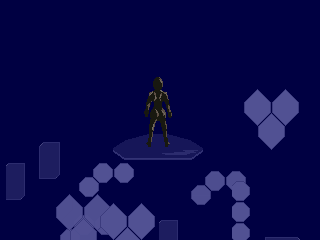 It all starts with our protagonist called Latha Sesame drifting and surfing through the virtual reality of the world of Technobabylon called Trance.
But sadly the worst case happens just as we visit her, her connection gets interrupted. And now she has to take care to get her connection to the slightly addictive Trance running again. Everybody needs a hobby! Click on the EXIT button that hovers around the empty space in Trance to finally leave the Trance and enter the real world in which there is nothing to be afraid of, or is there?

To reconnect the Trance connection you actually have to do it, you finally have to leave your appartement. The door to the outside world should actually open when you use the terminal to the right of the door but it seems like this thing is broken too, so we will have to improvise some more and get this point and click adventure game running!

At first you should collect some items from all over you room just like: The plastic tray (and the according fork) from the table, the shower gel from the left side of the bathroom and your wetware node from out of the toilet!
Now you can take care of the lockers under your bed. They are all empty except for the left locker. But of course this locker is locked. Use the slimy shower gel to get the drawer sliding nicely again and receive a wirecutter and an odd trophy made from tin.
After all this is done you plug your wetware into the terminal at the door and now you can access this CPU via the Trance Uplink. The food machine in the wall also wants to have an uplink to your trance, so plug your wetware into it too and finally reach it via Trance.
The foodmachine also has a memory card plugged into it, take it out (it is a separate hotspot but also easy to find). Plug the Memory Card into your trance uplink above your bed now. 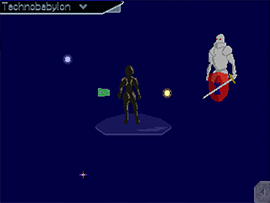 After you did this you can enter Trance again. At first open your mails. Just click on the letter icon. One invitation and 2 spam mails, isn't it great!? The DataPack from the last mail stays on your screen. Of course this is malware, so don't access it but click on it to put it into your buffer (your Trance inventory).
Now talk to the knight, ask him some questions, especially if he can let you out of your own room. But he can't but he tells you that you need physical access to the door terminal to open it.
Well then, then you better talk to Cheffie, your friendly Chef from your foodmachine you linked via the wetware. You can ask him some things and he even tells you how to get rid of him...
Luckily Cheffie's Memory Card is already displayed in your Trance Dashboard, so load the virus DataPack onto the Memory Card and leave Trance again by clicking the Exit button.
Latha already has the infected memory card in her inventory, so just put it into the memory card slot on the food machine again and reenter Trance.
Talk to Cheffie again and complain about his crappy ugly food (I don't much like your food). Cheffie tries to access new recepies but this doesn't work as the Trance is not connected to the world out there. BUt at least you can now ask him about the recepies on his Memory Card. And so Cheffie infects himself with the virus on the memcard but he still there somehow. So you just tell the nice knight that Cheffie is infected with a virus and the knight takes care of Cheffie and gets rid of him. Finally!

And there Cheffie is gone and noone is stopping you from doing funny things with the food machine. But to not only recycle plastic but to receive something useful from the machine you need some more material that the machine can transform. Use the wirecutter and cut off the showerhead. Now cut off the cable from the post in the middle of your room. Use this cable to pull out the grille above the door to your room. Now put the grille, the shower and the odd trophy into the recyclinghole of the food machine. Push the button on the food machine and you get a shiny metal try and an even shinier metal fork. You can use the metal fork to pry open the terminal next to the door and shortcircuit the terminal to finally open the door to freedom!

And here you have some interesting sites to visit related to the game:

Walkthrough Technobabylon 3
Complete Walkthrough for the 3rd part of the series. It's getting better and better!

Technobabylon - The official website
With a nice new Technobabylon header graphic and infos on Part IV. And also lots of other games by Technocrat.