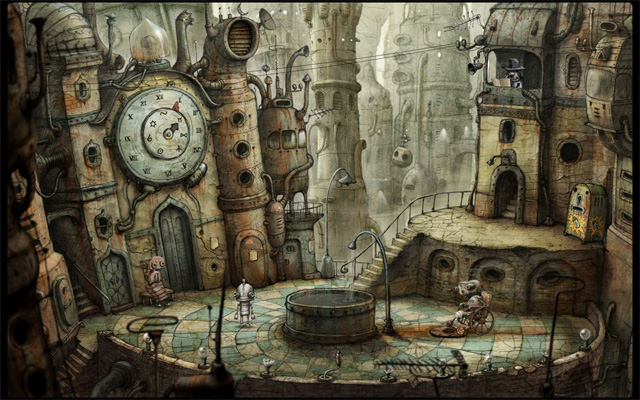 Yes, this is the church in the town center of machinarium. So get the

crank handle that is hidden in the lowest regions of the screen, right in the middle, stuck in the wall.
Put the crank into the hole next to the churchdoor and turn it. You see, you can control the hands of the clock with the clock crank. But you don't know where to go, to which time to set the clock, so take a look at the posters on the church. There is one with a halfmoon on it, don't care about this yet, but look out for the infinity symbol. So turn the hands of the clock to VII at either the snake, the two facing triangles or the circle with the dot inside. The bell will ring and the believer robot will enter the church and let you see another poster. There are the times for the jews written on the now revealed poster. And the guard on the upper right of the screen looks rather jewish, doesn't he? So turn the hands of the clock to VI at the spiral (the sun is crossed out) and the jewbot will leave his post and go to church. Once he is inside the church you can go up to his post and steal his

loudspeaker up there. See, it was not that hard to find the loudspeaker. And this is the perfect loudspeaker for a broken radio, but we don't have this yet...

Now talk to the old man in the wheelchair. He wants some oil for his old and rusty wheelchair and so he gives you an

empty oilcan for it. But we'll fetch the oil for him later, now we step up the stairs to the left. See you on the next page.