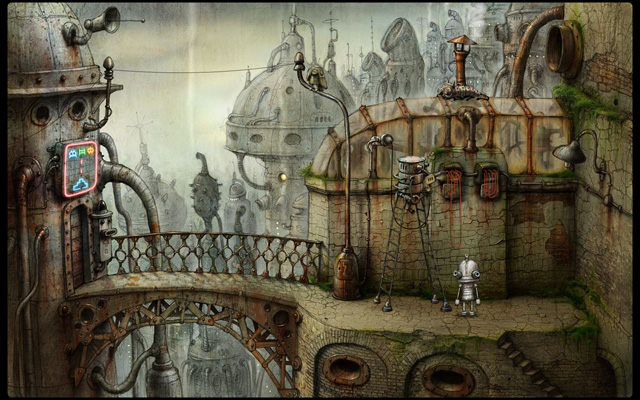 Open up the fusebox panel of the powerpole. Play around with the puzzle inside and once you start to move the one and only useful

puzzle piece in the upper right corner of the sliding puzzle it drops out (before tuning in or even turning on). And the worst part is, the robotic owl steals this jigsaw puzzle piece for the electricity puzzle right in front of your eyes. That are some really bad reflexes our robotic friend here has. Well, the owl-bird imitates you anyways, so step into the middle of the bridge and stretch and relax your robot and look at that, the robot owl does the same. So keep on going up and down until the cable the owl sits on breaks. The longer you keep going up and down without stopping the better. If this doesn't work try to stretch with the same rhythm the bolt on the very right next to the cat goes up and down.
So grab the cable that is now hanging around here now and tie the wire to the handrail of the bridge. After that we pick up the jigsaw puzzlepart the owl just lost and onwards to the crackers like puzzle on the electric box. 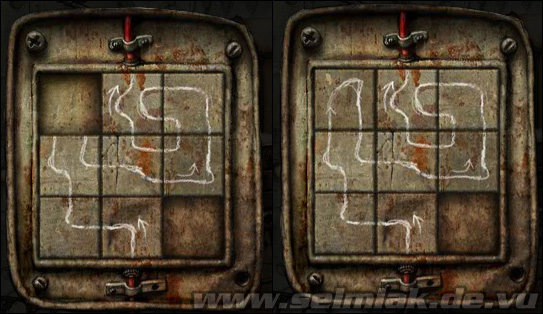 Slide the parts of the sliding puzzle so that they line up like shown in the pic above. Then put in the missing piece to make it look like it is shown on the right side of the picture above.

So, now we're gonna catch the little cat. Climb up the ladder and stand on top of the soldering robot. Pull out his plug and he will throw you down. While you are down there and he is still distracted grab the red cables and pull them out of the wall. The soldering robot will notice this and tries to disentangle the cables and moves to the other side (without breaking through though). While he is on the right side of the cables climb on him and pull the

cat's tail. The cat is now annoyed and tries to flee. But what the cat doesn't know is, that the handrail is now electrified. So once the cat touches the handrail it gets stuck on it and this is how we catch the cat. So we just go to the fusebox and remove the puzzlepart or move another puzzle part away and the electricity goes away and the electrified cat drops down. Now pick up the cat and go back to lowtown.