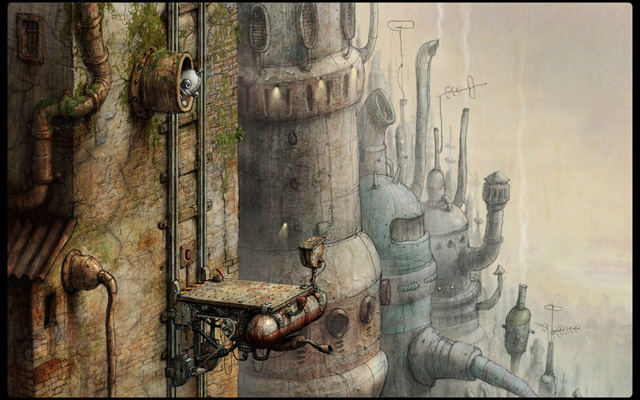 The way through the well brings you to the outer side of the city walls. Jump down onto the plattform and press the red button. Yes, that red button. At least no pool designed to cool nuclear fuel rods will explode when you push it. You just drop down one storey until you are in front of the kitchen. 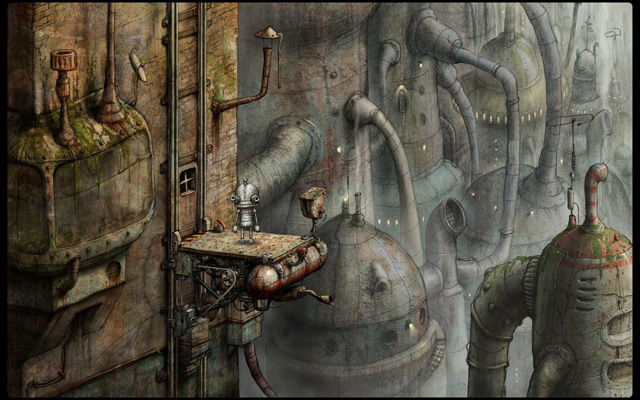 You can't do all that much down here by now, so look around, maybe we'll see something to do. Why not look into the window here. Oh look at that, we found our kidnapped girlfriend. That's great! But we can't rescue her yet, but we can play as her. 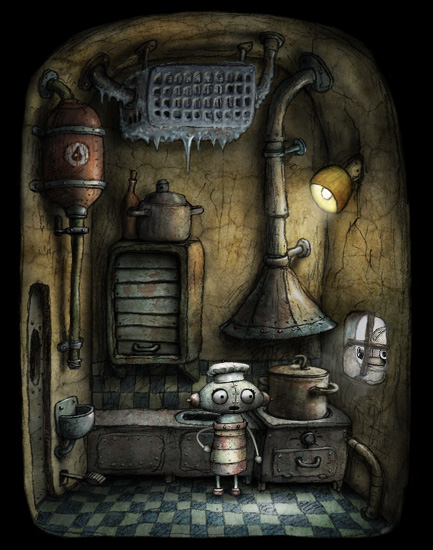 Quit your forced work and put down the pot from the stove. Just put it somewhere on the floor. Now open the cupboard and take out the

corncob. To pass the time, start making popcorn by throwing the corncob onto the stove. The corn pops immediately and throws down a

metal bar outside. Pick it up and hand it over to your girlfriend in the kitchen.
Let the girl stand on the pot and use the metalbar to open the cooling tube. Take out the

cooling tube. Let's have some fun with the cooling tube and put it into the cooking pot. You have to put the cooking pot back onto the stove before though. Yummee, that's delicious. Now that we got a brand new

hose we can attach it to the oil tap above the sink. The robots know what to do anyways, so just watch them refill the plattform.

You can kickstart the plattform by pulling the rope on it. Once it rattles you can use the panel that looks a bit like a pentagram to control it. Just play around with the buttons until all the whites are down and all the reds are up. A lever appears. Pull it and up we go. 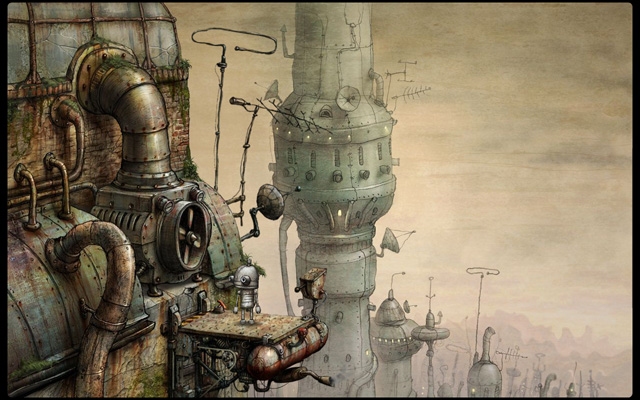 Finally we reached the upper end of the city wall. But we can't go on, as a moody airvent blocks our way. Talk to it and it will face you with some riddles. If you solve all the riddles you solve them, but nothing happens. So try to annoy the airvent and always give the wrong answers. The airvent's mood will darken and once it is fed up with your stupidity it spits out its mechanical guts.
As dangerous as this seem, the good thing is, the way is unblocked now. Let's jump into the airvent's airway and we can continue our quest to save our girlfriend and stop the bombing of the main tower.