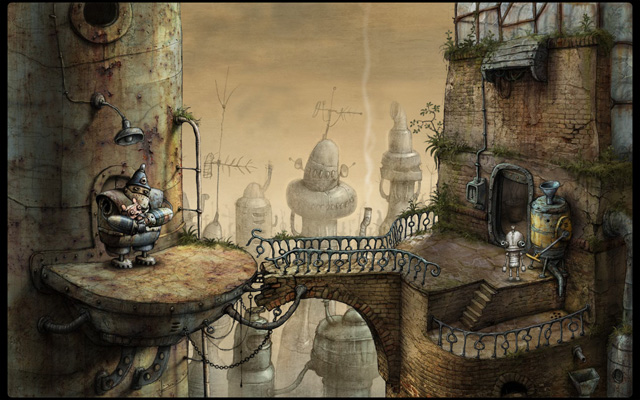 So there is a press standing here. What else should we do than put the sunflower seeds in it. But don't start pumping yet, as the oil will be lost then. Put the oilcan under the outflow of the press onto the drain in the floor down the stairs. Now you can start pumping and sooner or later the

oil will flow.
We cannot do anything worthwile with the robocop that is standing there as the guardian of the elevator just yet, so just slide down the drainpipe to the right of him (which you can also climb up from the bottom now) and walk to the old robot at church square to give him his sunflower oil. He is very pleased and gives you an

invitation for the arcade and while doing so he drops his

bandage. Pick up the bandage and then we rush to the arcade. The arcade is located there, where we just toasted the robo cat.
We enter the elevator at the end of the next page, we have to play some more game up to then...