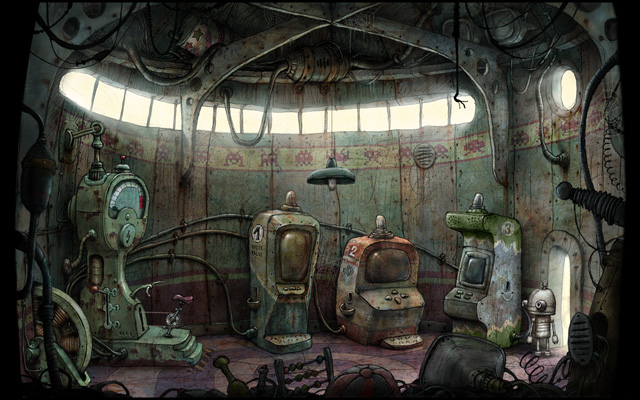 Welcome to the coolest arcade EVER! Here you can play for free and even earn money by playing the games. To do so we first need to power the arcade machines. Jump on the bike and ride until the red level is reached. Now the first machine is powered. Here we can play 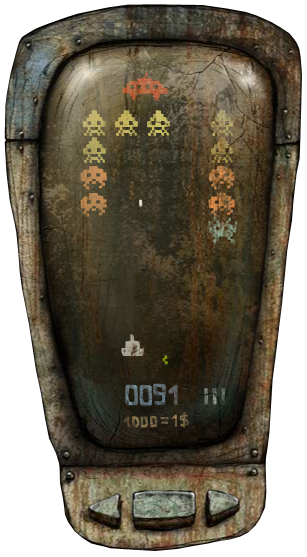 Okay, just shoot everything that moves =)
The small invaders grant you as many points as the level you are in. The red UFO gives you a stunning 50 Points at once. You should dodge the shots the invaders shoot at you, but you can also shoot these shots. Try playing with the keyboard. This is much easier than playing with the mouse, the arrowkeys move and space fires. Tactically it's the best idea to start shooting the invaders in the middle first, because this will stop the remaining guys from running all across the screen. But don't let them come too close.
As soon as you scored 1000 points you'll get your very first and hard earned

The escape game is as simple as it is tricky. The gameplay is simple but the levels are tricky. Your ultimate goal in the escape arcade game in machinarium is to move the small blue dot, that actually is a square, into and out of the red squares on their open side.
You move the square with the 4 direction buttons below the screen of the arcade cabinet and in case you screwed up you can reset the level with the round red button to the right.
It can be hard to describe the solutions to these levels so I will list the directions you need to take in every level first and above the actual textual solution.
(D = down, U = up, L = left, R = right).

This first level is so easy that you don't even need a description. You can escape this level in 5 moves. You can do it!

dollar. So now you don't need any more money, but you can try your luck with the third machine anyways. But you won't get all that far and earn a third coin. And sadly it is impossible to repair the third arcade machine to play it and get a third dollar. But of course you can replay the other two arcade games as many times as you want, but you won't get any more money for this. And you have to complete both arcade cabinets. It doesn't work if you play your favourite game twice as you only get one coin once for every completed arcade cabinet.
So, head back to the churchsquare. 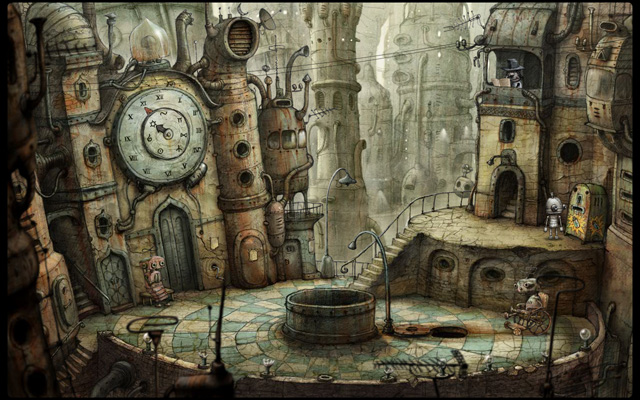 Put the two coins into the battery machine and receive your

two batteries. But you can't give them to the robocop like that. Use the

bandage from the rusty robot to

tie them together. Yeah, that's what the robocop wants, so let's rush to him. To do so just go to the connection between church square and lowtown and jump up to the drainpipe and climb up all the way to the robocop. Of course you can also drive up with the elevator at the city wall, but there you first have to go down and let your girlfriend refill the gas, so climbing up the drainpipe is a lot faster and less stressful. But on the other side... the view from the elevator at the city wall is great!
Up here at the robocop you give him the battery and he is more than happy that he can play with his toy and lets us pass along into the elevator. Use the small button next to the door to call it and then hop in and up we go towards the bomb.