You can't see that Metal Gear Solid 2 was released already in the year 2001 by playing it, because it rather looks like a game from 2002. Haha, a joke, well, it looks really good compared to other PS2 titles from 2001. But the characters are not as detailed as characters in the better games of today like Star Craft II and the like but the game has a lot of charme in itself and a really intense story about weapons of mass destruction, conspiracys and conspiracys against conspiracys and then there is the cool guy called Snake. Snake is in this game again and he's cooler than ever. Raiden is another character you will play, he is a bit unsure about what he is doing and what it's all about, but how should he know better. But you will get to know all this better when you read my Metal Gear Solid 2 Walkthrough on the following pages.
The game is so very detailed it is really funny to just run around and play with the environment. Everything you find in the game can be used or at least shot and something happens. The sound when shooting one of these firealert bells is completely different from the sound when shooting the pan in the tanker canteen. Sometimes these objects can also be used as distraction methods in this sneaking game. The music is always fitting and sets you into this secret mission sneaky mood and once gameplay gets fast the music is hectic too. And what about the voicework. These voiceactors are really cool. And of course the story is like every Metal Gear Solid ... totally exaggerated and super cool. If you haven't played it yet, you missed something. Well, at least for the time you are actually playing and not watching another lengthy cutscene... but when you are playing my Metal Gear Solid 2 Solution in html format (sadly I have no Metal Gear Solid 2 Walkthrough in PDF format here yet) should be really helpful for you, as there is everything you need to know in, and even more, from the very first steps to the final boss Solidus Snake. 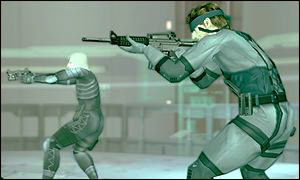