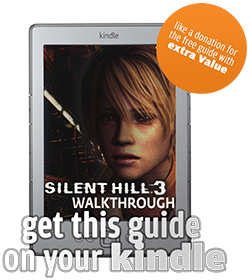 This chapter is about my personal experiences and observations. And of course my creativity about the naming of the creatures out of Silent Hill 3.

The list about who has to be hit how often with what is not all that complete because I didn't have the time to try out more by now and so it is only there where you can actualy get some info from it. But of course you can mail me your own experiences with killing the monsters and how many hits with what weapon are needed. You will get your deserved credit where it is due. And also if you have images of the monsters you can contact me and send me some, I'll be happy to use them here.
The bossmonsters and the strategies for them can be found in the right place in the FAQ. Sadly the FAQ is only available in german. By now...

These are the monsters you can find in Silent Hill 3:

This guy is really annoying. He seems to be made from raw flesh only. At least he looks like this.
He crawls along the floor and tries to kill your nerves and you. Once you thought you got rid of him and killed him he attacks you again and drains your health.
Really annoying.
Just running past him also doesn't work as it is easy for him to get you and bite into you and be stuck.
So it is better to shoot him for a safe distance and avoid him in a huge radius. Electrocuting him is without any effect as Heather doesn't reach as far down as the floorcrawlers are crawling.

This guy first appears in the chapel and heavily tries to stab you from there on.

So what do you do?
Shoot him from a distance or avoid him in a huge radius. But they are mostly there where there is no room to avoid them. So wait for the right moment. Let him stab, dodge the attack and then run past him.

This thing weights at least 300kg or more and is tired.
Until is stood up you already smashed his head with the Maul. Sometimes he can take more, sometimes he is dead after 2 hits.
After shooting him with the shotgun he first falls over which is a start for the bect technique that works on him. If he is sitting at the beginning (mostly it is like that) smash the maul over his head twice.
If he comes walking at you shoot him with the shotgun. He falls over and you can hit him with the maul twice. Sometimes even thrice.
If he stands up he hits you really fast and that can drain some of your health. So run away for 2-3 meters, turn around and shoot him with the shotgun again. Then hit him with the maul again (now it is possible to hit him 4 times now) and do the same all over again.
ATTENTION: Sometime the fat sack builds up some good speed when he is after you.

Here is some data for the hill with different weapons:

These are available in small and big, make your choice. Actually you have no choice, the smaller versions are the first version you encounter. They don't do much besides jumping at you and doing a bit of damage to your health. But you can get rid of them pretty fast.
Later in the game there are the bigger versions of them to be encountered and these are more effective with their attacks.

So what do you do?
As with every monster, try to avoid them. If there are many of them you don't have a chance, if there is a single one of them he doesn't have a chance.

This thing is about 1.5 times as big as Heather but for that really slow.
Instead of arm he has strange thick knobs that I like to call cudgels (or clubs, but calling him club swinger could lead to wrong understandings...). He uses his cudgels to push Heather around which causes liitle damage to her. But he can also stab with these cudgels and this causes more damage.
Of course he pushes Heather around on purpose to get her farther aways from him, because he can only stab her when she is in some distance but still close.

So what do you do?
Avoid getting close to him. If you can't avoid him shoot him from a distance or smash on him with the pipe or the maul. Hitting him with the melee weapons takes longer than killing him by shooting.

A limping, scuffling creature that breathes heavily.
They first appear in the Brookhaven Hospital in Silent Hill, where else should they?
The nurse is armed with a stick that has quite a range, don't underestimate it.
Realy seldom the nurse is armed with a pistol, but her aiming is really bad.
If you want to defeat her with a melee weapon she will hit you with the stick once or more. And if there are more than one nurse at you, which is the case most of the time, then it is a good idea to switch to firearms or try to run past them without being hit.

3-4 hits with the Katana (hard) OR
3 Elektroshocks

Quite slow things that look like huge spiders. If you get too close to them they get out their knives and stab you.
Always when these spider things appear there is an annoying soundtrack running so you better be running yourself too, this is your best bet.

So what do you do?
As they are really slow you will run past them all the time.

These things are pretty fast. They either jump at Heather and cause little damage to her health but will sum up over time. Or they bite her and drag on her which causes more damage of course.

So what do you do?
It is best to run past them (without the bulletproof west). If they are chewing on something is is good enough to just be silent when passing them.
You can use the beef jerky to distract them (I absolutely never managed to do so, but it is said to be possible), or shoot them with a few bullets from the handgun (after 3-4 hits they are gone for good.)
Mele weapons are not your prefered choice against the zombie dogs as they are too fast for these weapons.