This ugly creature will attack you in 4 different way, this means with 4 different weapons.
And this only with weapons that you posess too.


1 Knive
At first she will attack you with a knive.

To fight back and destroy her you only need the katana. Just smash the blade on her over and over again. If you are fast enough she won't have a chance to strike a single hit.


2 Handgun
The second thing she offers you is shooting you with the pistol.

You should stay close to her as she only shoots from a distance. If you are close enough smash the katana on her again. It is possible that she blocks you blows, but then just keep hitting her, as some of the hits go through and are not blocked by her and slowly kill her.
Of course she might just hit you with the pistol when you are close, you can't block that, you have to be fast for that. So don't forget to heal yourself after this fight.
Sometimes she runs away from you to get some distance between you and her to finally be able to shoot you. Run after her and use the stun gun on her. This will take her down.


3 Pipe
The third weapon for her is the pipe.

Of course she tries to beat you up with the pipe but misses most of the time =) This makes this a lot easier.
To save bullets just hit her again with the katana. It is best to hit her not directly from the front but a bit from the side so there is an even smaller chance she hits you. After some hits from you she is gone again and it is time for the final fight.


4 MP
Now this sick bastards attacks you with the Machinepistol.

This is not very nice. Luckylie she only shoots from the distance, so as always try to get close and don't get hit while doing so. This is not that easy so keep an eye on your health and heal if needed.
So if you are close to her just hit her with the katana and she will try to hit you just like she did with the pistol and sometimes even hit and drain some health from you. So there you have another reason to heal every now and then and when needed.
Shooting her from a distance it not a clever idea as the MP is a powerful weapon and it hurts you more than you hurt her, if you hit her at all, or even see her at all.

Once she is down stand on her. It happened to me that she stood up again after a painful fight and then I had to fight her again for as long as before and this got annoying really quick, so be sure and kick her and stand on her. 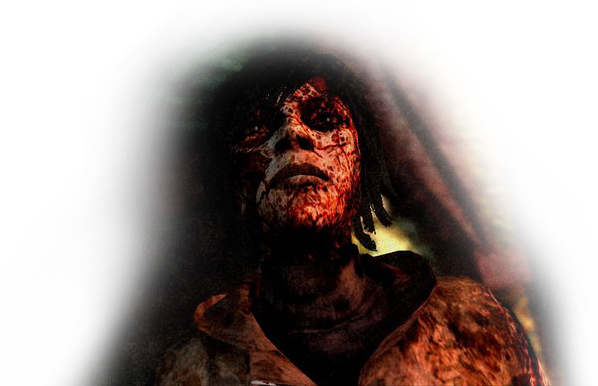