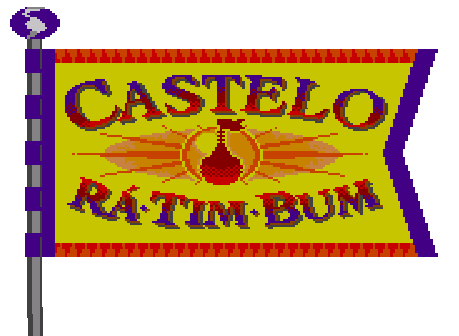 
Now you are in a room with a suit of armour. Run to the edge and push open a door to the next area. This will take you into the main library area where there is a ladder to reach the platform above.

However it is better to go along floor level on this part so you don't get hit by falling books. Pass the two poems that you are forced to read (and which don't seem to translate into English very well so I've tried my best to make them make sense):

Suddenly someone appears
Determined to do good,
As for the evil
A cure shall exist.
Continue to the end,
For those who seek succeed.

As even the sloth grows tired
There are two sides to a scale
Lies become truth
Cold burns as a fire
The simple difficulty
Is already a rule of the game.

Then climb the ladder at the end to reach the level above. Avoid the falling book (you can tell which ones fall, because they have a blacker outline than the others) and go to the coat of armour to enter the next area.

In here don't climb the ladder because you'll just reach a coat of armour at the end of the row that you can't pass. Instead go along the floor level, run past the desk in the middle that will spit books out at you that can kill you (running past will lose some energy, but not much). Then at the end climb the ladder and head to the second coat of armour to enter the next room.

In here either go along the bottom, passing the poem...

In this balanced world
Everything has a flip side.
And for each elixir
That makes someone grow smaller,
There is a potion with power
To stimulate one to grow bigger.