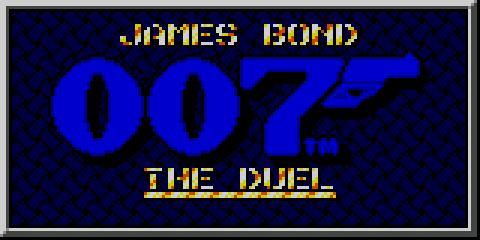 Description from manual:
Bond enters an artificial volcano, designed by Greypen to protect his research labs. This is where the shuttle launch control is housed. Bond must rescue more hidden hostages in this mission, but take care as the volcano may be fake, but the lava isn't.

You are under ground. Head right and across the lava using the floating platform making sure to avoid the two lava-balls that jump up from the lava below. Once on solid ground kill the miner and avoid the water geyser on your way to the ladder. Climb that then kill the miner at the top before climbing another ladder. Keep heading right jumping past another water geyser. Another automatic platform awaits to take you over another lava lake from which another lava-ball comes out. Cross the lava to the other side before crossing another lava lake in a similar fashion, again avoiding the lava-ball. On the other side kill the guard and get the checkpoint.

Description from manual:
Bond must now climb the shaft of the volcano. Use the platforms to get higher, but take care of the lava producing chutes. Be very careful, there are NO mission restarts for this mission.

No checkpoints are available in this level so be careful (or as it says in the manual be VERY careful).

Head right and go onto the automatic platform. This one is different from the ones you've been on before because it doesn't lead to ground at the other end, instead there is another automatic platform you need to jump on. In all there are three of these platforms and three lava-balls as you cross across this lava lake.

At the top head left to collect a Q-case before heading right where there is a lift which takes you up. At the top jump the gap and get onto the next lift. Here kill the guard and head left to another lift. At the top jump the gap and use the second lift. Kill the miner and head right to the second last lift of the level. Use that and climb the next ladder avoiding the lava balls being shot at you.

Kill the guard and use the next lift then head left killing the guard. Keep heading left to finish the level.

Description from manual:
At the top of the volcano lies Greypen's research labs. Seek out all hidden hostages and use the platforms to get across the lava flows.

Head left. Use the automatic platform to cross the lava avoiding the lava-ball in the middle. Kill the guard on the other side and head up the lift. Use the next lift to get to the next level where there is another miner to shoot. Jump left and kill the miner here. Climb one of the yellow poles and get the 2 Q- cases on the platform above then climb another pole to get a couple more watching out for the gun-wielding miner.

Now get on the moving platform and kill the guard at the end. Jump to where he was and get the 2 Q-cases. Fall to the level below and kill the guard. Release the hostage to the right then head left. Climb the ladder then the pole to get to the top level. Head left where there are 2 Q-cases before going down again. To the left release another hostage and kill another guard.

Jump left to another platform. Kill the miner before heading down two lifts and killing another pesky miner. Jump to the next platform where there is another guard to kill. Jump two more gaps and kill the guard here before heading left to finish the level.

Description from manual:
Bond must now defeat the fiendish oriental - OddJob. OddJob moves quite slowly, but his steel edged hat doesn't. Jump and duck to avoid OddJob's hat, take care of the lava-balls.

On this level there are two platforms at the side and one across the middle just above this. Below the middle platform is lava and a lava-ball.

Oddjob (you may remember him from Goldfinger) is on the other side and keeps chucking his boomerang hat at you. Best thing to do is to duck and shoot at him from where you start. His hat will fly over your head giving you no more than a haircut whilst your bullets will eventually kill him.