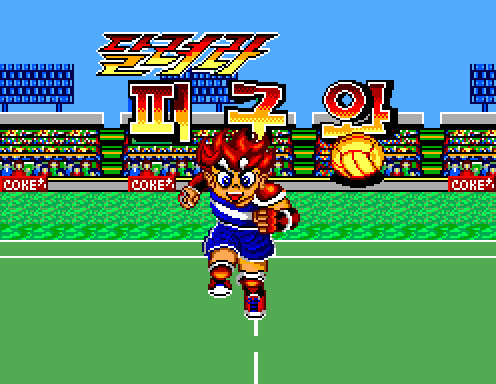 At the main menu there are two game modes:

1P vs 2P can be used to play matches in multiplayer.

1P vs COM can be used to play against the computer. Upon entering the mode you are asked to select your team from the 8 fictional college teams shown (all of which are symbols with Korean writing below them). The computer will also select one of the seven remaining teams.

If you win this match you will go through to another match controlling the same team, and play against another computer-controlled team. If you keep winning then you will play seven matches, one against each of the seven teams that you are not controlling.

If you win against all of the seven teams you get a trophy for your efforts. Of course, if you lose any of the matches you don't get the trophy as it will be game over and you will have to beat them all again if you want to get that trophy.

And that's the game.