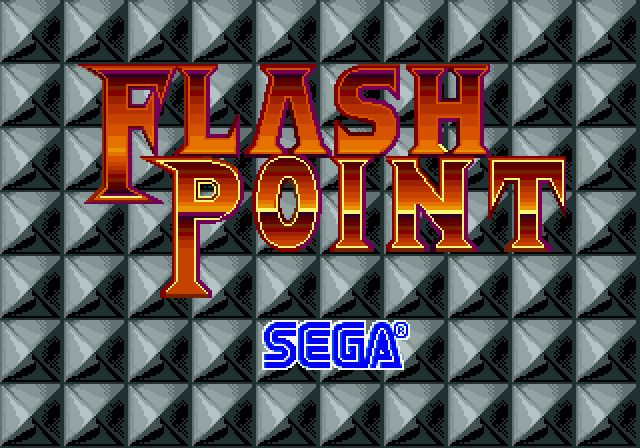 This is a Tetris-like game. The difference is that this one comes with blocks already on the board, including bomb blocks (these are flashing yellow).

The board is a 10x20 grid. Shapes come in from the top and drop to the bottom. These are all made up of four little cubes arranged in a shape. There are 7 different shapes that fall:

As the shapes come down you can rotate them so they fit into the board somewhere. When a row is completed that row disappears and the blocks above fall a row. To progress past a level the player has to detonate all the bombs on the board by completing the rows with the bombs on. At this point "flash point" is reached and the level (or stage as this game calls them) blows up and you advance to the next one. If however the blocks reach the top of the screen before you do this then the game is over.

The screen layout includes some stats to the side of your board. These show your score, the level you are on (which is the speed the game plays at), the stage you are on (from 1 to 90), and an arbitrary best time which you can aim to beat for a 1,000 point bonus. This best time starts at 1 minute for your first stage then decreases based on how well you do (the quicker you complete the levels the lower it gets).

As for the speed level, the longer you take to complete the stage the quicker the game becomes making things harder. Your speed level starts at 0 and goes up to 10 which is fast before going to 11 which is slow again if you make it past 10. Then the speed builds up again, before decreasing at level 21 and so on in cycles of 10.

The other thing to note on the screen layout is at the top where it says "next". Here you can see the next shape that will fall your way. Looking at this can help you plan your next move.

This game can also be played two-player. The screen is already set-up that way with the left-side being played in a one-player game. The second player will play in the right-side of the screen. The two games are quite independent of each other so that in essence both players are playing single-player mode as their actions have no consequence on the other player.