In Single Player you can choose to play a:

But before you can play you need a squad. To get a good squad together read the tips in the Squads section.

A single player season sees you play league matches against computer-controlled teams. It is like offline-Seasons mode. You start in division 10 and hopefully earn promotions and titles as you make your way up to division 1 which you will also hopefully win.

Once you have selected your division (and you can view the fixtures and rewards to help you decide between the options available) then you will come into the single player season menu. Here you can select:

Play Match takes you into your next match.

Current Season will show your current progress with the points required for promotion and for the title shown, as well as the points you need to get to avoid relegation to the division below. If you win the title before completing 10 matches then you will not need to play the remaining matches. Clicking this will also show your rewards for completing the current division, your current form, and your last three results.

The Fixture List shows your results and fixtures in the current division. Check out the fixtures for each league including star rating of the opposition teams, and the difficulty level of the matches, in the Ultimate Team Single Player leagues section.

Lastly on the main menu page of single player season you can see at the bottom that if you press X you can forfeit a season.

You can use this for when you have not played any matches in the current season but want to play in another division at the same level, otherwise if you have played a match it will relegate you. This is useful for completing all the divisions at each level and filling out your trophy cabinet.


A single player tournament is where you play in a 16-team knock-out tournament against computer-controlled teams. It is a knock-out cup with drawn games going to extra time and penalties so that a victor can be determined. The team that wins goes through to the next round whilst the team that loses gets knocked out. If you win through all four rounds you win the tournament. The reward, the difficulty level and the restrictions for entry are available on the main screen. The little icons at the side of the trophy silhouette show the amount of coins you get for winning, any cards you get for winning, and any packs you get for winning. When you do win the tournament the trophy silhouette gets filled in with the trophy. You also get a trophy entered into your clubs trophy cabinet which you can see in the My Club section of My Club.

Some tournaments are featured tournaments. These are only around for a limited period so you have to make sure you win them quickly before they disappear (the closing date is shown) if you want to maximise your trophy cabinet, otherwise:


Entry to the following tournament is closed. Featured tournaments will expire after a set time, winning them quickly is key to building your clubs trophy cabinet.


Featured tournaments will always be at the far left as you cycle through the tournaments available.

Single player draft is a new mode for FIFA 16. It is a chance to play matches using the top players in the game, even if you dont have them at your club, via a draft. You can purchase entry to the draft for 15,000 coins, or 300 FIFA points. You can also enter with a draft token which is a rare gold card that you can get in packs (although these may be mythical as I have never seen one other than in the FIFA 16 Beta).

Upon starting a draft you will play up to 4 matches and the aim is to win all four. If you do win all four you get better prizes. The prizes will be packs of cards, or maybe coins. They should not be of lesser value than your original entry fee.

Upon using a draft token you put your team together. First you need to select a difficulty level to play at. Choose the highest one you can win at. This way you maximise your coin return per match, and you get a four-game win streak thus earning the best rewards (rewards seem to be similar for all difficulties).

Next you have to select a formation from 5 random choices. The formation cannot be changed in the current draft once selected.

Then you will be offered a 5-player draw and you need to choose one of the players for captain, and then you get 5-players to choose from for each remaining position on the pitch, including the subs and reserves. They will mainly be top players, such as legends and high-rated rare golds, including TOTWs, both current and past. Try and choose a team of players to get decent chemistry (tip: you can put the subs or reserves in to your starting XI if your first picks dont give good chemistry).

Lastly you get to draft in a manager (by pressing RT) choosing one from five options. Choose the manager with the best nationality and/or league to match your teams players (to gain chemistry bonus).

Then you enter the draft menu. Where you can choose to play match, look at your FUT draft history or look at the prizes (although this doesnt actually show you the prizes just your prize progress).

The good thing about these rewards, as opposed to rewards won through winning your regular Ultimate Team trophies, is that they are tradable.

The TOTW challenge (Team of the Week) pits you against the TOTW, as determined by EA. The TOTW consists of 18 to 23 Players who have performed brilliantly in reallife the weekend before.

The players chosen have boosted sttributes compared to their standard cards and are known as in-forms. In-form cards have black backgrounds to distinguish them and are available in packs for one week only (but can be traded on the transfer list at any time).

The TOTW comes out at 6pm UK time every Wednesday, although they will stop when FIFA 17 is released.

For more on in-form cards see the Squads section.

The bonuses on offer for beating the current weeks TOTW are as below:

This bonus can only be obtained once a week by playing the active TOTW. This bonus is on top of the coins you would normally earn from a match.

Choosing to Play a friends squad lets you view and play your friends squads. Its a good place to see the squads they are using.

Once a match is played then the result is stored and your friend is notified as to the result. Why not play a beginner match against them with your strongest side and stuff them?

At each divisional level there are four to seven different 10-game leagues you can play. By clicking on them you can see the fixtures to see what teams you'd be pitted against and the difficulty level that the matches would be played at. Youll also get to see your rewards for winning, including any free packs (although contents are untradeable). All the single player divisions are listed below. Bear in mind the any entry requirements and whether you can meet them. Can you reach the ultimate goal of winning Division 1? 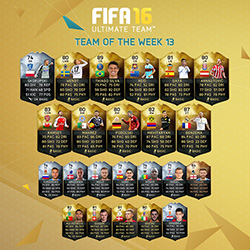 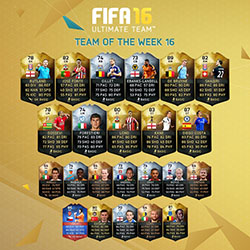 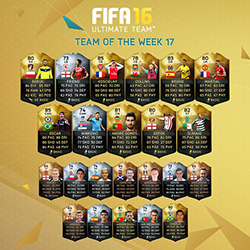 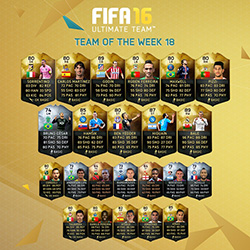 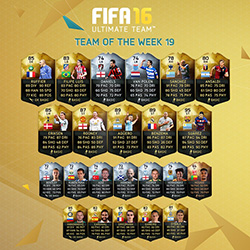 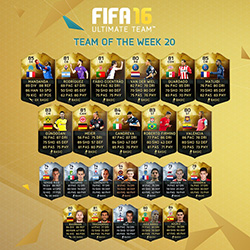 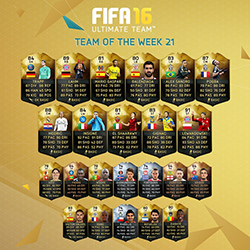 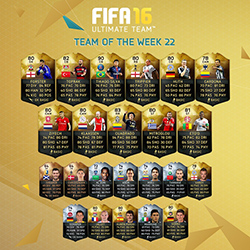 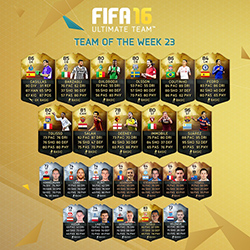 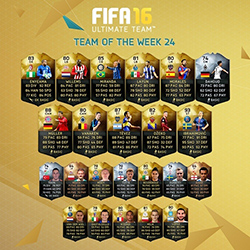 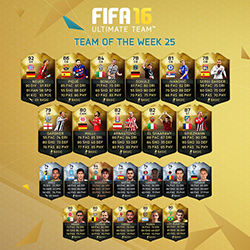 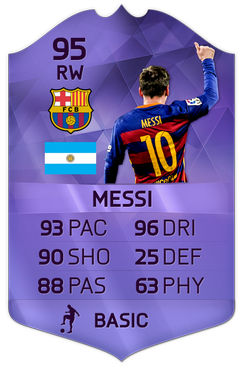 Some of the pack prizes above are defined below:

Maintain your squads for a rock bottom price. Includes 4 contracts of mixed quality.

Great value for maintaining your squads. Includes 12 consumables, at least 8 Gola with 1 Rare.

A mix of four items including a Player rated 80-85 on Loan.

A mix of four items including a Player rated 85-90 on Loan.